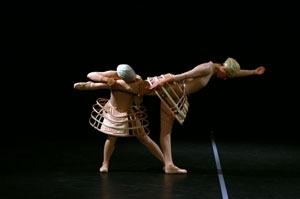 Nykker is an abstract pas de deux based on the concept of having notions, or the observation of what might be called nervous female behaviour: crotchety, eccentric, restless, whimsical. The performance touches on exchanging, holding, enjoying, confronting and celebrating these notions. Often this concept is considered to be negative, but it also expresses femininity, a desire for attention, an excuse to cock one’s head and slam a door or two, to be funny and engulfed in naughty thoughts.

The music to Nykker was commissioned by and created in close collaboration with the choreographer. The choreography and dance performance were created first. The music is tightly synchronized with the dance. The sound material consists mainly of computer processed recorded sounds, including slamming doors, interviews with two ballerinas in Canadian English and Russian, an interview with a famous British pop star as well as other vocal sounds.