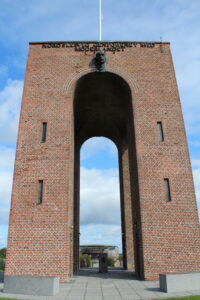 A Hymn to Reunification

The iconic tower at Ejer Bavnehøj near Skanderborg, Denmark has been transformed into a permanent site-specific sound installation that can be heard at random times during the day. Visitors standing under the tower arches are surrounded by sound for a few minutes. The site traces back to the days of the Vikings, when signal hills with bonfires were used to send messages about approaching enemies.

Signal is an unending hymn commissioned by The Friends of Ejer Bavnehøj to celebrate the centennial of the reunification of Northern Schleswig with Denmark in 1920, after having been surrendered to Prussia in 1864. At the end of World War I the boarder issue was decided peacefully by a referendum. The populations in two zones voted on whether they wished to be part of Denmark or part of Germany.Northern Schleswig voted to return to Denmark, while Middle Schleswig voted to remain German. The referendum was respected by both nations.

The work is a permanent sound installation integrated into the tower, which was completed in 1924. A specially designed permanent 4-channel speaker system is built into the tower walls. The music is generated by software that uses algorithmic (rule based) composition technics to continually generated and transform new music. The installation is active for about 3-5 minutes at a time with pauses of 30-60 minutes in between. There is no time schedule, so visitors cannot know if or when they will hear the music.  Signal began playing on June 15th, 2020. 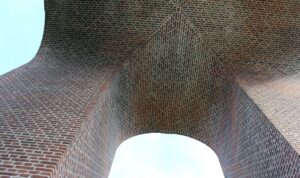 The acoustics under the tower arches are an integral part of the sound system and composition. When standing directly beneath one of four the arches, one is engulfed in the reverberation from the high walls and arch. But in the center between the four arches there is very little reverberation. If one moves towards one of the four arches one will hear other aspects of the music. By walking around under the tower visitors create their own experience of the work.