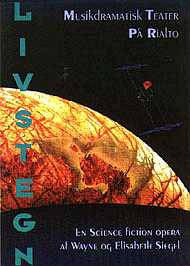 Though a product of fantasy, the opera is actually based on scientific knowledge. Europa, one of four largest moons of Jupiter, is unique among the many moons and planets of our solar system. The NASA Voyager II mission to Jupiter revealed a moon with a smooth surface, completely covered with ice. Many scientists now believe that a huge ocean of liquid water may lie beneath a 50-100 km thick mantle of ice. The possibility that Europa might be covered by an immense ocean makes it one of the few places in our solar system, outside Earth, where there might be some chance, however slight, of finding other life forms.

The opera takes place in the distant future, where a permanent submerged base beneath the ice of Europa has been established to explore the vast ocean there and search for signs of life. Two young scientists, Adrian and Natalie, arrive byspacecraft at the base, where they are to join two other scientists already stationed there. Deep beneath the ice of this foreign world a dramatic story unfolds: Natalie falls in love with Adrian, but he rejects her. A shy and isolated person, Adrian becomes even more withdrawn from his fellow scientists on the base and one night, while alone at his post, he believes he hears audio signals emerging from some artificial source on the ocean floor. Previously sceptical of any possibility of life on Europa, Adrian now desparately tries to convince the others of his discovery, despite his total neglect in collecting any scientific proof. His emotions gradually turn completely from the near world and the people around him to the fantastic idea of discovering life on Europa, and he finally takes off alone in a submarine to seek his destiny in this unreachable world.

Over three years in the making, the idea for Livstegn developed while Wayne and Elisabeth Siegel were brushing their teeth at home in Malling, Denmark. “Despite the foreign setting, on a deeper level the story deals with human beings and the terrible things that can happen when they are afraid to accept their own feelings,” explains Danish novelist Elisabeth Siegel, whose ballast includes six years working as a clinical psychologist. Although they have lived together since 1974, this is the first time until now Wayne and Elisabeth Siegel have collaborated as artists.

Performing with computers “It was clear from the very beginning that computers would play a major role in the opera,” says Wayne Siegel. “On the one hand, the three settings – the space ship, the space station and the submarine are all machines, and on the other hand the story is, on a certain level, about the relationship between man and machine. The crew is isolated in a small place, completely dependent upon machines for their very survival.” The opera involves 14 human performers – four singers, nine musicians and a conductor – in addition to the technical sound, light and video crew. But the singers and musicians perform with a number of computers that react to the performers, creating sound effects, music and images.

Images from Space In addition to the music, text and setting, live video is an important part of the opera. A large video sceen is a central part of the stage setting, and live video of the performers as well as actual images taken by space probes and video segments produced especially for the opera are shown on the screen. The image material for the opera is described in the manuscript, but video artist Mikal Bing had a certain amount of artistic freedom in putting the visuals together. Bing and the Siegels linked their computer to NASA’s computer to transfer images taken by the Voyager mission to Jupiter.

Livstegn was premiered on November 3, 1994 and received nine performances at the Rialto Theater in Copenhagen. The circumstances for the production were far from ideal. Conductor and artistic director of production company Musikdramatisk Teater, backed out of the project as conductor at a late stage after accepting a major conducting contract. In addition, the stage director left the project as well. The loose-knit production company had difficulties in gathering the necessary muscians and rehearsal time was scarce, so the performances were musically speaking far from ideal. Interesting enough, the technological aspects of the piece worked perfectly! The conductor, stage director, set designer and video technician all did a tremendous job in pulling the work together. Unfortunately, some rather severe last minute cuts were made by the stage director and some of the video segments deviated greatly from original ideas described in the

manuscript and meant to convey a major part of the psychological drama. The librettist felt that the depth of the story had been lost in the process, the composer felt that the work had suffered musically and tension built during the final stages of production. Reviews were mixed, the most negative ones pouncing on the lack of depth in the story – the librettist could only agree. Ironically, one of the critics even acclaimed the stage director for doing what he could to save a shallow story, clearly emphasizing the fact that an audience can only judge a work from the performance and not from what was missing. The idea of a prose opera using everyday understandable language also put off some of the critics. Livstegn received an enormous amount of media coverage, with feature articles as well as reviews in most of the major Danish newspapers. The premiere was recorded live by both Danish television and Danish radio.

“Opera has made it into outer space! All the way to a claustrophobic space station on one of Jupiter’s many moons. In reality it is all happening at the Rialto Theatre in Frederiksberg, Copenhagen, but this is easily forgotten during the enthralling performance of ‘Livstegn’, which received its world premiere on Thursday: a new and remarkably well constructed opera by an American composer residing in Denmark, Wayne Siegel.”

“… Thanks to Elisabeth Siegel’s libretto, portraits of the scientists are well delineated, making the characters stand out as whole and credible personalities. ‘Livstegn’ embodies an excellent direction in contemporary music theatre.” Jakob Wivel, Ekstra Bladet (Copenhagen)

“… Instead of using the characters as an excuse for demonstrating fantastic scientific discoveries, Elisabeth Siegel uses science fiction as a means of describing the fragility of human beings in their confrontation with the awesomeness of outer space.”

“… The result is impressive, with electronic and acoustic elements gracefully overlapping one another.”

“… The opera stands out as a fine dramatic totality, partly due to the straightforward and flexible stage setting created by Marie i Dali with video graphics by Mikal Bing.” “… The opera ‘Livstegn’ is an impressive totality.”

“Pigs in Space! A funding scandal. The space opera Livstegn should have been stopped at the countdown” … “Meanwhile the Royal Theatre and Holland House struggle to find money to produce an opera by Per Nørgård for Copenhagen Cultural Capital of Europe 1996. What we need is artistic control on the part of the public authorities.”

“… In Wayne Siegel’s minimal music, acoustic and electronic elements are woven together in an ostinato style characterised by extreme beauty and force of attraction…” “… Wayne and Elisabeth Siegel’s music and text make up an inviolable unity.”

“… The performance captures its audience, and there is good reason to bid this new opera welcome.” Lilo Sørensen, Det Fri Aktuelt (Copenhagen)

“… The cramped, enclosed laboratory setting, with its inertly lit walls and ceiling, draws our attention directly to the large video screen on the back wall. The

images shown on it are just as descriptive and imaginative as everything else presented to our eyes and ears. Every science fiction freak will love it, and there is no machine-romantic hocus pocus: almost everything can be clearly understood.”

“… One cannot assert that Wayne Siegel composes less humanly for the computer than for living musicians. On one hand the computer is used to create effective aural settings with electronic beeps and signals, on the other hand it is used to create sonic spaces for the irrational, for dreams, longing and visions: a liberating formlessness in a world of diagrams. Among the most fascinating and mysterious are the gradual transitions between synthetic and acoustic sounds.” Jan Jacoby, Politiken (Copenhagen)