for motion-tracking system and chamber orchestra

Shiva’s Dance is a concerto for motion-tracking system and sinfonietta that was commissioned by the Athelas Sinfonietta, Copenhagen with financial support from the Danish Arts Foundation. The title refers to the cosmic dance of the Hindu god Shiva, which can be seen as an allegory of the cycles of creation and destruction, birth and death.

The electronic sounds are controlled by my hands moving in front of my laptop, allowing me to freely interact with the ensemble. The image from my laptop webcam is divided into a matrix of twelve rectangles. The amount of movement within each rectangle is calculated in software. I can control twelve sounds individually and dynamically: the more I move in each rectangle the more sound is heard. If I do not move, there is no sound.

The form of the piece is cyclical, fluctuating between meditative sections, where the soloist and ensemble form a single entity, and contrasting, agitated sections with exchanges between the ensemble and the soloist. 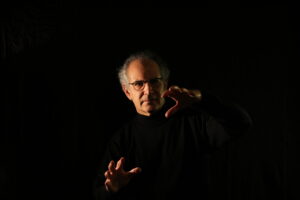