’Troldspejl’ (’Magic Mirror’) has been created specifically for DIAS’ platform in the public space – a place where you are in movement but also in a waiting position. The interactive work reacts directly on the presence of the spectator, and the movements of by-passers generate synthetical sound images. The computer-generated sounds balances between a singing voice and a more discordant sound universe. The work changes the sound environment including the visual image and appearance of the spectator – the mirror presents a distorted, colorful and almost anonymous version of the self. It resembles a technological hall of mirrors that, like in Tivoli, distorts the reflection for the amusement of the spectator who will see an alien version of himself.

The work draws attention to how we are watched in the public space and breaks with the invisible codes that define how we move in public: a playful dimension is added to our linear A and B pattern. However, it is not only the spectator’s body that is changing – even the surroundings are marked by the work’s production of sounds and images. The space of everyday life are filled with visual expressions (commercials, signs, objects and bodies) and sounds (traffic noise, intercom systems and human voices) that we barely notice. The image and sound universe of ‘Troldspejlet’ distinguishes itself radically from the well-known expressions of the daily life, and thus establishes a creative and playful disturbance in the daily life.

‘Troldspejl’ is Wayne Siegel’s first work that includes both image and sound. A unique work where Siegel expands his practice to include the digital image, and employs the immediate force of attraction in the sounds and visuals. 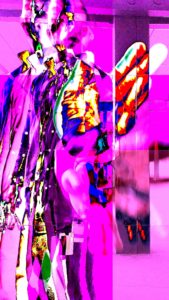