for solo dancer and interactive computer (15′) 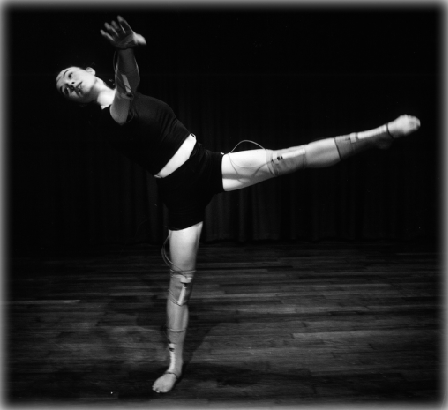 Movement Study employs the DIEM Digital Dance system developed by Wayne Siegel and Jens Jacobsen. The system worn by the dancer measures angles of the dancer’s limbs and sends this data to a computer via a wireless transmitter. In the first and last sections, a slow polyphonic texture is established in which the computer determines tonal material while the dancer controls the volume and frequency spectrum of eight drones. In the rhythmic middle section, the computer produces the tonal and rhythmic material, while the activity levels of the six voices are controlled by the movement activity of the dancer.

The first sketch of the piece was composed in collaboration with the choreographer Warren Spears and presented at a workshop presented by DIEM and Nyt Dansk Danseteater in Copenhagen in 1996. A new version was developed with choreographer and dancer Helen Saunders, was premiered the work in a concert version at the Aarhus NUMUS festival in April, 1997 and performed at ICMC97 in Thessaloniki, Greece in September, 1997.