Drowning/Burning is an interactive sound installation created for the Skive Museum of Art and premiered on June 12, 2010 and exhibited until August 29, 2010. With its anonymous look the big, black box does not quite show what it contains – when stepped upon it burst into a roaring inferno of sampled sounds of water and fire. Drowning/Burning was supported by TEKNE produktion, The RoyaI Academy of Music and The Skive Museum of Art.

Drowning/Burning is an adaptive sound installation designed for a public space such as a museum. Adaptive music is computer-generated music that can be controlled, advertently or inadvertently, by a listener or audience. The installation consists of a small stage that visitors can stand on, either alone or in small groups. There is nothing else to see. All equipment is hidden under the stage. Emphasis is placed on making the interaction natural and intuitive.

A digital camera is mounted three meters above the stage, which is 1.5 meters wide, 2 meters long and 45 centimeters high. The camera is connected to a computer located under the stage. The camera image of the stage is divided into twelve rectangular areas, each with its own corresponding sound. Camera based motion tracking is used to detect motion on the stage. Specially designed software translates the detected motion into sound. The sound system is also located under the stage. The stage was specially constructed with an acoustically transparent metal grated floor. 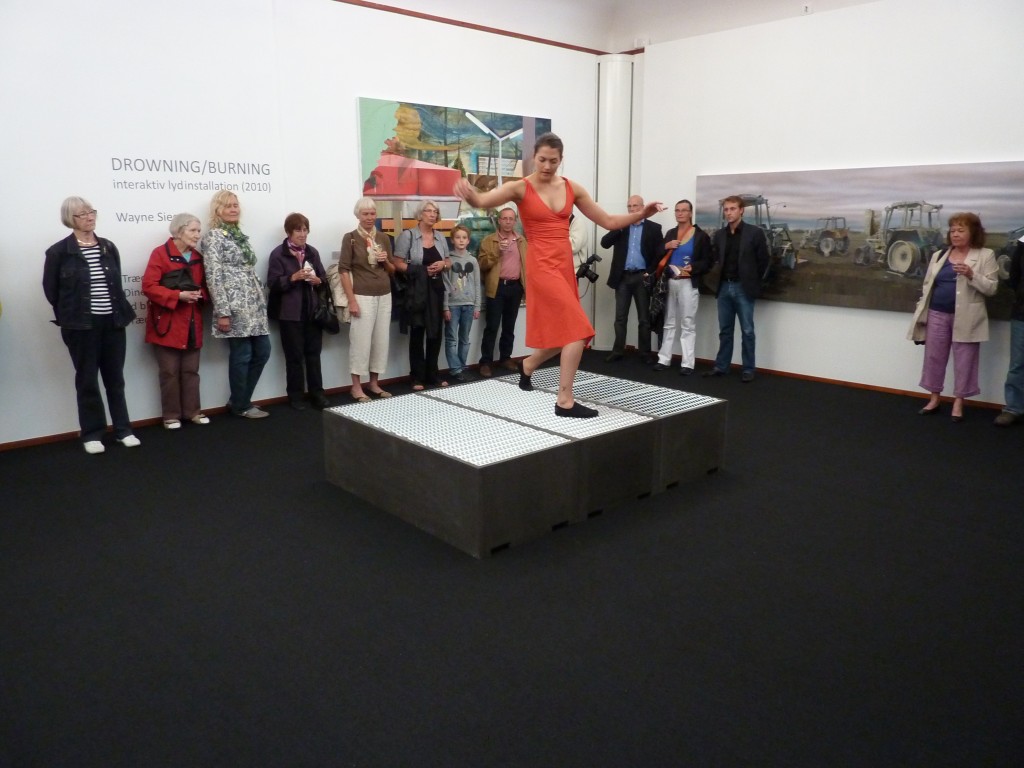 The work is designed for audience participation. When one or more visitors move on the stage, the stage is transformed from silence to an immersive soundscape with associations to water and fire. Transformation between the two elements, fire and water, is made gradually. Direct and intuitive interaction encourages the participants to move around on the stage. The more one moves, the more sound is heard. In other words, the more one struggles, the more one is consumed by the elements. The Spartan physical appearance was chosen to challenge participants to immerse themselves in the sonic experience. Since the installation is constructed as a stage, visitors interacting with the installation will in fact be performing for other visitors.

The production of Drowning/Burning was made possible through a generous grant from TEKNE-Production, the digital art and entertainment production unit of the network TEKNE, located at CAVI (the Center for Advance Visualization and Interaction at the University of Aarhus). The stage was designed and constructed by Wahlberg Light and Motion Design. In January 2010 the sound installation was set up at CAVI and the work was experimentally developed during January, February and March of 2010. The concept, content and software was created by Wayne Siegel. Exhibition

Drowning/Burning was produced in collaboration with the Skive Museum of Art located in Skive, Denmark. The opening took place on June 12th, 2010, running until December 2010.