”Outside-In” is a site-specific sound composition created for the Black Diamond’s permanent 12-channel sound system, which is installed in the Atrium of the Royal Library overlooking Copenhagen harbour. The music is “performed” Monday –  Friday at 1:00 PM and Saturdays at 9:55 AM and 1:00 PM. The installation is played by a computer program developed by the composer. This permanent installation was premiered on April 24, 2015 with generous support from  the Danish Arts Foundation. 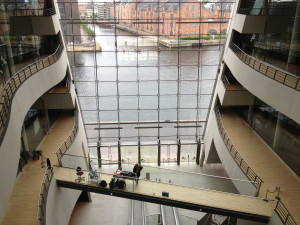 The work consists of nearly 100 short sections, each slightly over one minute long. Every time the composition is played, various sections are selected and combined. The choice of sections, section order and overlap time between sections is determined by the computer program according to a set mathematical rules that are influenced by various external elements including the tide in Copenhagen harbour and the time of year. The composition is unique for each performance and always unpredictable, even for the composer

The sound material used in the piece consists mainly of sounds recorded in natural surroundings and then electronically processed. The public has had an opportunity to send in their own recordings, some of which can be heard in the work. Many of the natural sounds are easily recognizable, but they will often be heard in strange combinations alongside other musical and electronic elements.

The Black Diamond is transformed into a surrealistic natural scene and the sound system of the Atrium is used to create a unique and magical space.

Listen to examples from “Outside-In” below: