November Ritual is a tribute to dark times. The concert will be performed on the Black Diamond’s large 12-channel sound system. The evening begins with excerpts from Solkreds, an outdoor sound installation that Wayne Siegel has created for the momument Dodekalitten: an enormous stone circle located at Kragenæs on the island of Lolland. Solkreds can be heard daily from sunrise to sunset, creating unpredictable changing sonic settings for the monument’s huge sculptures that were carved out of solid granite by the Danish sculptor Thomas Kadziola.

For this evening’s concert the musicians will improvise with Solkreds and gradually a new work will arise: November Ritual. The work was commissioned by the Black Diamond with financial support from the Danish Arts Foundation and is made up of a fixed composed framework with room for improvisation. Using specially developed software, Wayne Siegel control’s sounds and their placement in the space by moving his hands in front of the computer’s camera. The soloists join the electronic sounds to create a tapestry of melodies and harmonies around them.

After an intermezzo with works for harp and trumpet by Palle Mikkelborg and Helen Davies, the evening is concluded with a version of Mørk er November (Dark is November) arranged by Wayne and Mira Siegel for voice, trumpet, harp and electronics. This Danish melody dates back to the Middle Ages, while the lyrics were written by the Danish poet Thorkild Bjørnvig in 1959. 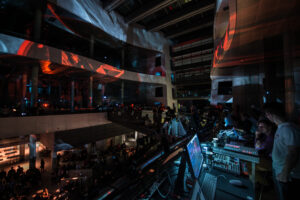